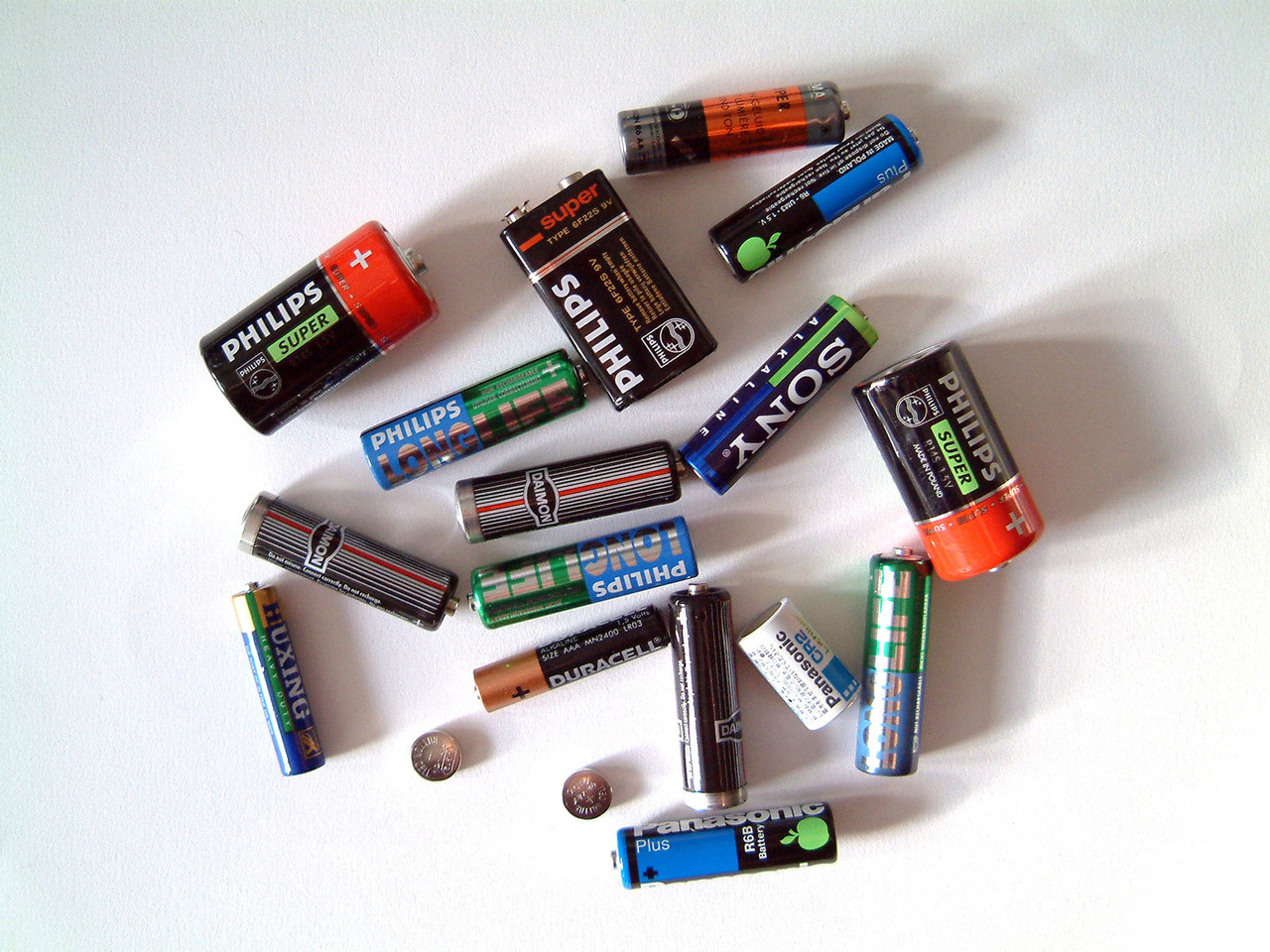 Batteries. For most people they're those little cylinder things that power kids toys. There are also the little silver ones for watches, music playing birthday cards, and other small electric gizmos. Now a days we have those mysterious and fancy lithium or something batteries powering our laptops and smart phones, some of them are in those new fangled silent running cars, and let's not forget about the tried and true care batteries we've known for almost a century. Batteries are it seems an integral part of modern society, but what do we really know about these little chemical wonders? The working details of batteries I'll leave up to the chemists, but here I can at least shed a little more detail to help you to make the most of your batteries.

Higher energy density by volume and weight than any other battery chemistry, lithium ion and other lithium based chemistries have become the backbone of modern portable technology. These batteries hold more power and weigh less in a smaller package; it's no wonder they're popular. Battery life is also fairly good at around 500 full charge-discharge cycles. Like most rechargeables performance of course varies on a number of factors; you can get more than the equivalent full charge-discharge cycles by limiting the depth of discharge. For example if you limit your depth of discharge to 50% battery capacity, you'll get the equivalent of 1500 full cycles. Long story short if you want your phone or car battery to live longer, you should not drain your battery lower than needed; best to aim for 50% discharge and no less than 20%.

These batteries are special amongst rechargeables in that they don't lose their charge when not in use. 'Self-Discharge' is when a battery loses charge by just sitting on the shelf. Most rechargeable batteries suffer from this effect to varying degrees; however, lithium ion batteries are largely immune and still maintain a quality charge after years or decades! There is a gotcha though; just because a battery doesn't discharge doesn't mean the electronics the battery is in is truly 'off'. Mobile phones are especially bad for this so you're well advised to remove the battery (when possible) from a mobile device, or plug it in periodically if you're not planning on using it for a prolonged length of time. While some lithium batteries will recover from being completely discharged, some will not; don't take the chance with your device, especially if your battery isn't removable!

Another interesting difference between lithium ion and other common batteries, is that they're the most likely to catch fire or explode. Woah, didn't know that! For the most part these batteries are quite safe, but avoid overheating, overcharging (if you're building your own charging circuit), and puncturing them.

In many ways NiMH batteries are the most robust of all rechargeable battery types. These batteries can handle heavy loads, many discharge cycles, and can be drained to nothing with little to no damage. High energy density second only to lithium batteries as far as mainstream batteries go. You'll most often see these batteries in AA and AAA consumer format, as they're similar in voltage to your typical alkaline non-rechargeable. Historically NiMH batteries have suffered from undesirable levels of self-discharge but newer models have greatly improved upon this. Even with a brand-new top of the line unit though, don't expect a full charge after a year in the closet.

The best feature of NiMH batteries is their longevity. These batteries can be fully discharged to zero up to 1000 times before wearing out. They work hard for you, and you don't need to treat them well. Just make sure you give them a top up charge before heading out to get the longest lasting charge.

Probably the most interesting thing about NiMH batteries is that despite their excellent performance, they're limited to use only in the consumer-sized battery formats. The reasoning why larger industrial versions for cars and off-grid applications are not available, is a real-life conspiracy involving a patent on such batteries being locked up by an oil corporation. Do some reading on the "General Motors EV1" for and see what conclusion you come to.

The original consumer rechargeable battery, NiCd has largely been replaced in the home by its more powerful and efficient cousin NiMH. NiCd comes typically in your standard AA and AAA formats, and until recently was also commonly used for portable electric power tools. Self-discharge is a real problem with this type of battery, and the component materials are highly toxic; this battery should always be recycled as opposed to disposed in the trash.

Despite a lower power density than other battery types, NiCd does have some properties that give it some unique advantages. The most prominent is the extremely high energy transfer abilities. This battery can pump out the current and then take it back while charging, faster than any other type. This property is why the battery was popular in power tools. It's likely they would still be used for this purpose if they had anywhere close to the energy density of Li-Ion.

NiCd batteries also suffer from an unusual charging shortcoming called the "memory effect". This strange effect causes the battery to 'remember' where it was last discharged to, and then lose the ability to hold more energy than the remembered level. This means if you only drain your battery to 50% and then charge it, then the battery will now only be able to store 50% of it's rated capacity. It's not clear if the memory effects kicks in the first time this happens, or if it develops over time. Typically the best way to maintain these batteries is to ensure the battery is fully discharged before charging.

Lead-acid battery technology has been around for more than 100 years, at time of writing. It is a tried and true technology found most commonly in industrial applications such as: automotive, off-grid power, and emergency backup. While these batteries have a number of advantageous properties, having lead as a primary component makes them excessively heavy compared to other batteries; energy density is also not as high as Li-Ion and NiMH, thus limiting their use to applications where weight and size are less of an issue.

While the reasons to use a different type of battery, lead batteries benefit from the considerably lower cost of their raw materials and construction, the high market penetration and availability, and the multitude of form factors available. Lead batteries also have low service lives if cared for properly.

Lead-acid batteries typically suffer from a much higher level of self-discharge compared to other rechargeable battery types, and are best used for cases where they are charged regularly prior to use. If sat unused not only does a lead-acid battery self-discharge, but it has a tendency to develop sulphur crystals internally; this is called "sulphation". Sulphation destroys the battery internally, rendering it useless; to avoid this lead batteries need to used as frequently as possible. A constant charge at a low level can help, but ideally the battery will be discharged somewhat and recharged again on a daily or weekly routine. Solar power energy systems are ideal for lead batteries due to charging with the sun in the day, and discharge at night.

For the most part lead batteries are completely safe. It should be noted however that lead is a toxic element, and thus lead batteries must always be recycled as opposed to thrown in the trash. Also beware that overcharging a lead battery can cause the battery to develop and vent hydrogen gas. This reduces the capacity of the battery and if not vented properly, can lead to the potential for a hydrogen explosion. Before you get worried know that lead batteries are very easy to charge compared to other types, so the risk is minimal.

Your classic consumer battery. Comes in all kind of shapes and sizes and has excellent shelf-life and capacity. The alkaline battery is the only non-rechargeable battery featured in this article. These batteries are common for kids toys and portable devices like walkie talkies, but are also found in miniature versions for watches and other small electronics. While this battery has been the staple of household for decades, the cost and performance of this type of battery vs NiMH makes it less desirable an option.

Since they're not rechargeable, Alkaline batteries are best suited for cases where a battery may be needed on short notice. These batteries can sit on the shelf for years, and the fire up as if they were brand new. While the energy density is high relative to even Li-Ion, the amount of energy you get out of a battery is reduced considerably the faster you drain them. For this reason alkaline batteries are best suited for low-energy toys, clocks, and other electronics. If used in a high drain application, an alkaline battery may lose over 50% of its potential capacity.

While these batteries are technically non-rechargeable, it is possible to recharge them under some circumstances. Unfortunately they must be charged very slowly to prevent them swelling and bursting, that it's not really practical.

Finally you must take care to remove these batteries from electronics when they are to sit for extended periods of time. The casing of this battery is an active component in its operation, and will crack and leak acid when the battery is depleted. Leaving the batteries in your device can result in the battery slowly being drained. It will then leak acid which will corrode the connectors of the device, potentially rendering it useless. Protect your devices and your batteries, and remove them when not in use.

In some stores or products that 'include' batteries, you may see other types of household type batteries that are not labelled alkaline. Often these batteries are labelled 'Heavy Duty' or 'Super Heavy Duty', etc. Unfortunately the opposite is true, and these batteries are low-cost batteries with short lifespans. You can typically distinguish one of these cheaper batteries from the higher power alkaline or rechargeable batteries just from the weight. Better quality batteries are considerably heavier than the alternatives, but you could also just read the label too :).